Alan was born at Victoria River Downs Station, NT in 1933 and worked as a stockman on many stations in the region including Newry, Ivanhoe, The “Elsey”, Maninbelli, Elizabeth Downs, Delamere, Willaroo and as head stockman on Beswick. When the town of Kununurra emerged, in 1965 Alan became a machine operator for the Government. His language is Ngarinyman / Ngaliwurru and he is one of the leading Elders in the East Kimberley.

Alan and his wife Peggy are both acclaimed senior artists. Alan has been painting since the early 1980’s and his talent is recognised Australia-wide and Internationally.

Alan has been fortunate in that he is one of a few selected artists whose attributes were outstanding enough to gain recognition early in the Aboriginal Art movement – along with his wife Peggy he exhibited with and participated in printmaking programmes alongside some of the most successful ochre artists in the East Kimberley region – Jack Britten, Queenie McKenzie, Rover Thomas (all deceased). His fastidious approach to his work has gained him an enviable reputation, commanding high prices for his paintings.

Alan’s limited edition prints of his own corroboree “Bali Bali Balga Joonba” were instantly successful, being collected by Parliament House. He and Peggy were invited to present this corroboree at the ATSIC Art Awards Perth, with dancing headboards woven by Peggy. This now famous corroboree is danced in Kununurra annually and Alan and Peggy still travel for cultural events, including ceremony and law for the youngsters.

His style is distinctive, elegant and precise and with every painting he shares the story depicting his culture, his knowledge of the country and his diverse experience of life. 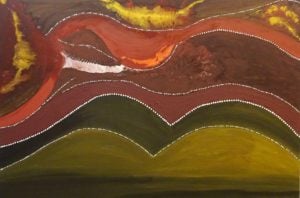 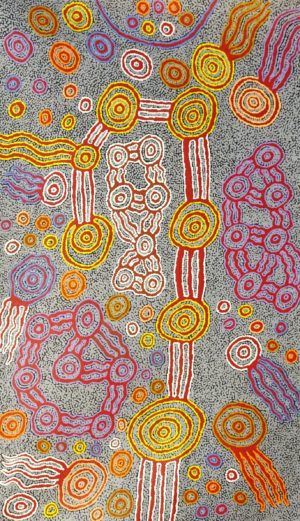 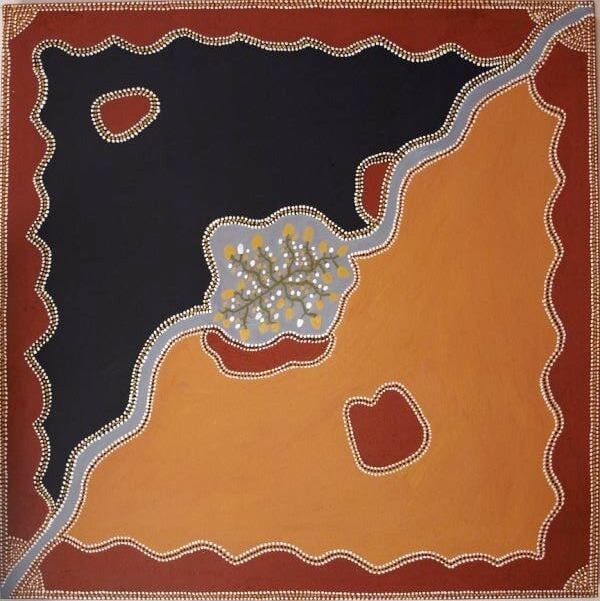