The site depicted in this painting is Puyurru, west of Yuendumu. In the usually dry creek beds are ‘mulju’ (soakages), or naturally occurring wells. The ‘kirda’ (owners) for this site are Nangala/Nampijinpa women and Jangala/Jampijinpa men. Two Jangala men, rainmakers, sang the rain, unleashing a giant storm. The storm travelled across the country from the east to the west, initially travelling with a ‘pamapardu Jukurrpa’ (termite Dreaming) from Warntungurru to Warlura, a waterhole 8 miles east of Yuendumu. At Warlura, a gecko called Yumariyumari blew the storm on to Lapurrukurra and Wilpiri. Bolts of lightning shot out at Wirnpa (also called Mardinymardinypa) and at Kanaralji. At this point the Dreaming track also includes the ‘kurdukurdu mangkurdu Jukurrpa’ (children of the clouds Dreaming). The water Dreaming built hills at Ngamangama using baby clouds and also stuck long pointy clouds into the ground at Jukajuka, where they can still be seen today as rock formations.

The termite Dreaming eventually continued west to Nyirrpi, a community approximately 160 km west of Yuendumu. The water Dreaming then travelled from the south over Mikanji, a watercourse with soakages northwest of Yuendumu. At Mikanji, the storm was picked up by a ‘kirrkarlanji’ (brown falcon [Falco berigora]) and taken farther north. At Puyurru, the falcon dug up a giant ‘warnayarra’ (rainbow serpent). The serpent carried water with it to create another large lake, Jillyiumpa, close to an outstation in this country. The ‘kirda’ (owners) of this story are Jangala men and Nangala women. After stopping at Puyurru, the water Dreaming travelled on through other locations including Yalyarilalku, Mikilyparnta, Katalpi, Lungkardajarra, Jirawarnpa, Kamira, Yurrunjuku, and Jikaya before moving on into Gurindji country to the north.
In contemporary Warlpiri paintings, traditional iconography is used to represent the ‘Jukurrpa’ (Dreaming), associated sites, and other elements. In many paintings of this Dreaming, short dashes are often used to represent ‘mangkurdu’ (cumulus & stratocumulus clouds), and longer, flowing lines represent ‘ngawarra’ (flood waters). Small circles are used to depict ‘mulju’ (soakages) and river beds. 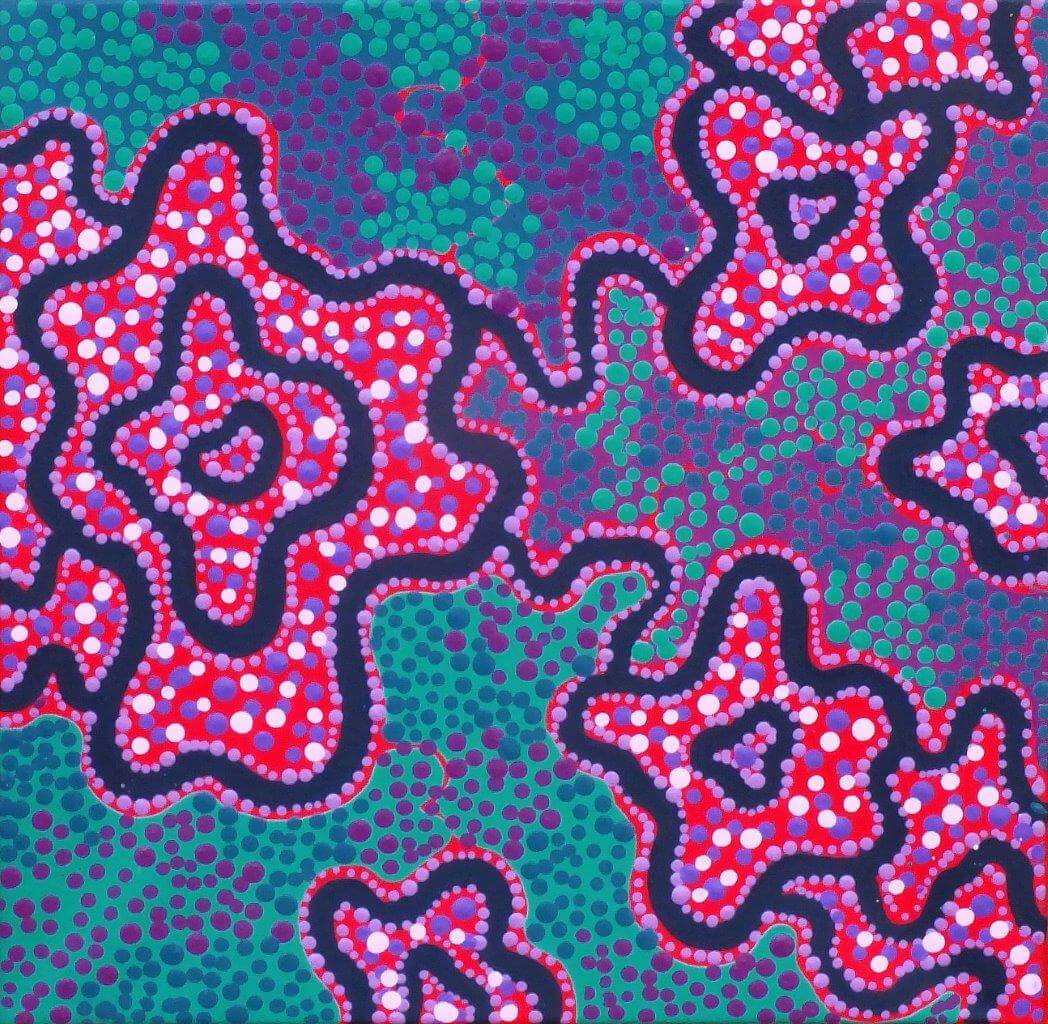