One of the founding fathers of the Papunya Tula Art Movement, this Anmatyerre artist remains the most celebrated artist in the history of Aboriginal Art and was the first Papunya Tula artist to be given a Retrospective, which began in October 2003 at the Art Gallery of South Australia and was on tour throughout 2004 and ended in 2005. Featured in numerous Aboriginal art books published to date, Clifford Possum Tjapaltjarri is recognised as a Master of colour, composition and symbolic narration of a unique ancient culture that his work and the Art of his contemporaries helped to preserve.

When asked why he became an Artist, he answered
“That Dreaming been all the time. From our early days, before European people came up. That Dreaming carry on. Old people carry on this law, business, schooling for the young people. Grandfather and grandmother, uncle and aunty, mummy and father, all that, they been carry on this, teach ’em all the young boys and girls. They been using the dancing boards, spear, boomerang all painted. And they been using them on body different times.  Kids, I see them all the time, painted. All the young fellas they go hunting and the old people there, they do sand painting. They put down all the story, same like I do on canvas. All the young fella they bring ’em back kangaroo. Same all the ladies, they been get all the bush fruit, might be bush onion, plum, might be honey ants, might be yala, all the kungkas (women) bring them back. Because everybody there all ready waiting. Everybody painted. They been using ochres all the colours from the rock. People use them to paint up. I use paint and canvas that’s not from us, from European people. Business time we don’t use paints the way I use them, no we use them from rock, teach ’em all the young fellas.”

In 1996 Clifford Possum Tjapaltjarri created a small collection of works depicting individual motifs similar to those that he included in his paintings. In a sense, these works can best be described as educational paintings created to assist in our understanding of this Master’s works, which are highly symbolic in form.

This work forms part of this collection and features a set of Emu tracks that show the Emu`s nails, or extra joints, at the tips of the Emu`s toes. Though predominantly shown in this work, these Emu nails are not always so clearly shown in other Emu imagery by this artist, but are always present, thus distinguishing emu tracks from bush-turkey tracks, which do not have the extra joint, or nail, at the tip of the prints.

This is important in interpreting the Master’s works, for different animals in the artist`s paintings are given form through their tracks, or symbolic bodypaint designs, which in turn are associated to certain areas of country, rituals and laws that are interconnected to Culture.

In terms of Emu tracks, this imagery is chiefly associated Warlpiri country and an area associated to an important Fire Dreaming, or Warlukurlangu. Emu tracks also refer to an area known as Mount Denison, which is associated to an Emu Dreaming that is linked to a sacred ancestral `Boss Emu` and secret-sacred men’s business.

Sometimes Emu tracks might also be shown in areas where the `Boss Emu` has travelled through, but not actually belonging to that specific country. But wherever these tracks appear, what remains important is correct recognition of the tracks, which this unique painting lends to and was the purpose behind its creation. 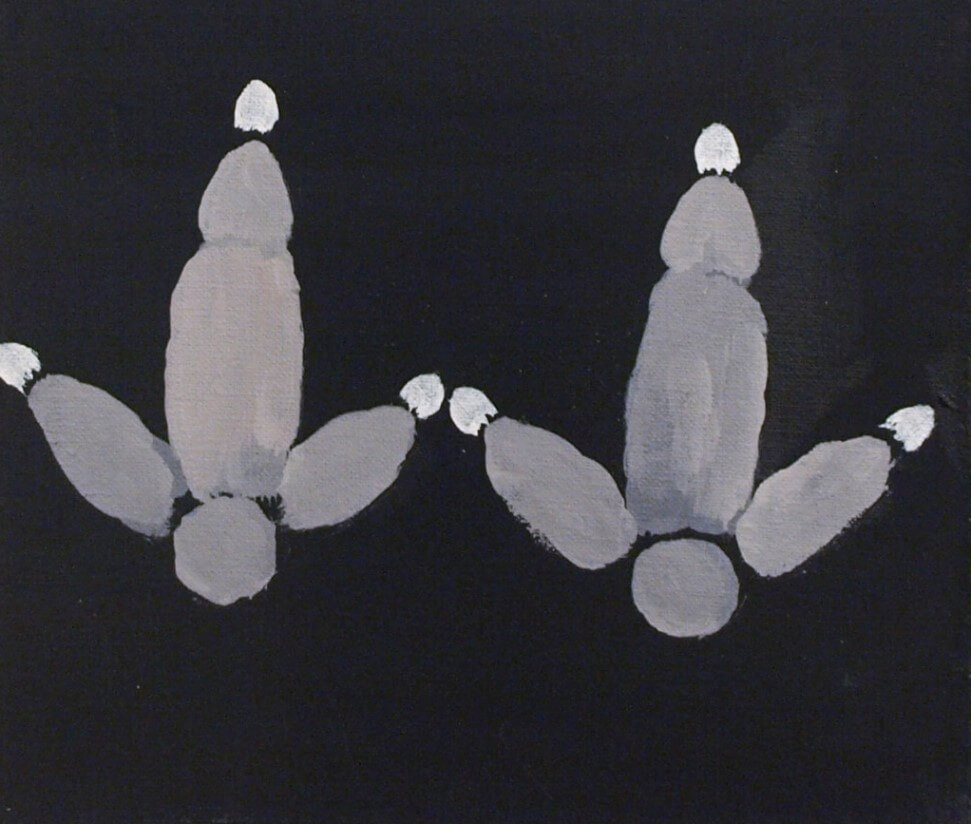