Story behind the artwork

This piece depicts Ngulru pods. The Aboriginal women gather the seeds, which are taken back to camp to be sorted and grounded before made into damper. In fine detail, the artist illustrates the seed pods attached onto the stems.  This Dreaming belongs to the Napurrula and Nakamarra women and Jupurrurla and Jagamarra men and is honoured during ceremonies. Music sticks are used during dance cycles and songlines.

Doreen Dickson Nakamarra
Doreen Dickson Nakamarra is a Walpiri woman from a famous painting family. Her domicile is the remote community of Willowra (Wirliyajarrayi), 250 km north-west of Alice Springs and 200 km from Yuendumu in the Northern Territory. She is closely related to International artist Janet Long Nakamarra and Mary Nabarula. The Nakamarra women have, since the beginning of the Australian Aboriginal Art Movement in Central and Western Desert regions, contributed greatly to the popularity of art from these areas.
Aboriginal Art, being proudly country based, reflects the Dreamings, Culture, Traditions of the tribes in their particular part of the country. The Walpiri style of painting is distinctive, often rich and colourful and sometimes subtle and delicate, but inevitably precise and focuses on the all important food gathering in this harsh environment, together with the very necessary water courses and soakages (rockholes), the travels of the early tribes to communities and all aspects of the land – fire, lightning, animal tracks and the broad horizon and sky under which they lived and on which they depended for direction.
Doreen’s works include Bush Medicine, Women’s Ceremonies and Bush Tucker Gathering. Her paintings depicting the Bush Damper Seed Dreaming in black and white filigree technique are breathtaking.
Doreen is a Third Generation artist – all the stories have been passed down to her and she undoubtedly possesses the talent to transpose her culture to canvas. 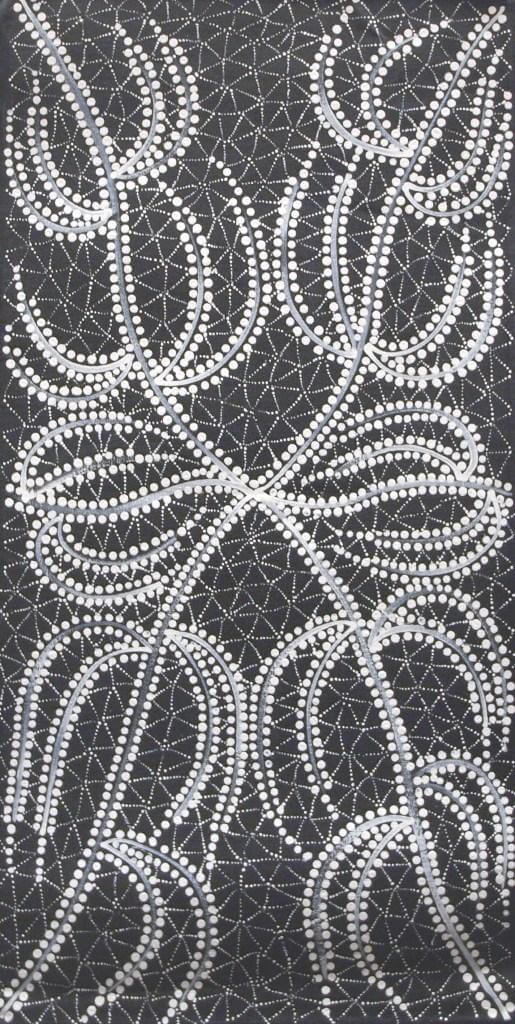