I don’t remember where I was born but my mother and father told me that I was born here at Murrwangi. My family was living on the mainland in the bush. Sometimes we would go to the mission at Milingimbi for shopping and to sell art and craft or crocodile skins. My father Djuwarlarra (1) who died at Milingimbi.

He went to school when I was little. We lived at Ngarrawundhu near the present-day hospital. I had my dapi here at Milingimbi. Me and Johnny Batarrk little brother (Weyli – dee.) here. Mis Lowe taught me and Mr. Fidock, and yolngu – Charlie Mayntjarri. Don was in my class and Michael Gadjawali. My uncle Jimmy L,jamunba took me to Mainarou to work as a stockman – really at Mountain Valley. I worked with Rembarmga people you know that August (?) from Malyanganak well his father was working cooking. One day I got hurt off a horse and went to Darwin to hospital. I got a job at Qantas then the airport in Darwin. Me and Wally (Lipuwanga) and Brian (Nyinawanga) and Jacky (Guningu tribe). We bin working there, a lot of people Milingimbi, Maningrida. Some worked at the Air Force getting training, some at Qantas. I was living near the airport, near Bagot. When I finished at Darwin I went back and worked at Maningrida – the same as a stoc an with a balanda called Danny Watson – Johnny Mayarra (dee.) and Johnny Bulun Buhm and Ray Munyal. First time we brought the cattle to Maningrida from Beswick and then took them back. They were kept near the airport and buffalo too. I started painting then at Maningrida. When I bin finish work then I bin started painting there. Jacky Mirrtji taught me to paint. We started to paint me and Don Gundinga, keep trying, painting, painting, painting.

Back in the Ramingining area I worked at Murrwangi until it closed. Malcolm Armstrong, Alan Baker, Neville Hoadly. I give up cattle work when Malcolm left and I kept painting. My first Gunapipi after hospital and then Qantas I went to Gunapipi in the bush at Ten Mile and we finished at Pine Creek. There were yolngu from here my families, Don and Dick, Ronnie and old man from Gamedi (Jacky) and old man Charlie Marapiny. All from Darwin and from here. From Oenpelli and from here. Gakawarr was from Oenpelli. A long way by foot walk.

In the Dreamtime two sisters called Boaliri and Garangal lived in southeastern Arnhem Land at a place called Ngilibidji, the stone spear country. The older sister already had a baby son by Woijal (Wuyal, Mewal, Udal) the dhuwa sugar bag man, and the younger sister was pregnant after having also committed incest under tribal law by having intercourse with a man of the same moiety as herself (dhuwa).

As a result of their behaviour the sisters were forced to leave their homeland. Woijal gave them a stone axe each and a number of spearheads wrapped in paperbark. These were for cutting purposes, such as chopping stringy bark from a tree to make a shelter, and stripping soft white sheets from a paperbark tree to make waterproof ceilings, water carriers and body coverings. Woijal had also shown them how to look for the small black bees circling around dead branches of trees, which would indicate the presence of bees. They were told to climb the tree and cut down the dead branch with a stone axe, then scoop out the wild honey (yarrpany) with the sharp spearheads. One of the spearheads would be used for circumcision should the baby turn out to be a boy.

On their journey Garangal gave birth to a baby boy at a place called Woirnari, then the two sisters wandered on until they reached the sacred well of Mirarmina. On the way the women had collected several small animals and plants to eat. They made a fire and threw the animals onto it, but everything came to life and ran into the pool. Boaliri then went around the pool to search for paperbark to make a cradle for the baby. She accidentally polluted the water by allowing some of her menstrual blood to fall into it.

Julunggul, (Witig, Yulunggurr, Bapi Yindi), the Rainbow Serpent, was asleep beneath a rock at the bottom of the pool. He awoke and sniffed the water, then angrily threw the stone out onto the bank and slid to the surface to see who had polluted his home. He observed the two sisters and their babies making a home of forked sticks with sheets of stringybark over them, and decided that they must be punished. So he blew a mouthful of water into the air and a dark cloud formed over the women’s shelter. Then he reared up on his tail and called on all snakes and goannas to rise up with him and cause incessant rain. The sisters quickly finished their home and went inside. They fell asleep but were later awakened when the rain became heavier. They went outside and found stars and a half moon in the sky, but over their shelter rain was still pouring down from the dark cloud.

In an effort to stop the rain the sisters began to sing and dance all the ceremonial power songs they could remember, but to no avail. Then they sang and danced the most powerful song of all, menstrual blood, but still the rain did not stop. This was because Julunggul was making a great flood, at the height of which he slid across to the sisters, who had fallen down exhausted, and swallowed both them and their babies.

This was a very wrongful act, because both he and the sisters were of the same moiety, dhuwa, and he should only have eaten yirritja food. He became violently ill, and rose up high to call for help. Other reptiles, snakes and goannas, stood up tall, talking to him and asking him what he had eaten to make him so sick. When he told them he had swallowed the sisters and their babies they were very angry and reprimanded him for eating creatures of his own moiety. He fell down in agony, spewing forth all of his victims. The impression of his body became the shape of the ceremonial dance ground for all future dhuwa people. Savage ants and caterpillars stung the sisters back to life, so Julunggul hit them on the head with his clapping sticks, and swallowed them again. This time he took them down into his pool and through subterranean channels back to their own homeland, where he threw them out onto dry land. They turned into rocks, which can be seen there today.

When their clansmen learnt of their deaths, they followed the women’s footprints until they came to the sacred well, and that night the two sisters appeared to them in a dream and taught them all the songs and dances which were to be used by the men in secret rituals. Up till that time women were the most powerful spiritual force, but by the sisters’ actions women lost their power to men, who were now to perform all secret ceremonies and the circumcision of male children.

As the men sat talking among themselves they worked on a huge hollow log, (the inside eaten out by white ants), decorating it with their clan designs. This was called a uwar drum and represented Julunggul. It was to be used in sacred ceremonies, but when not in use rested in the muddy banks of the Mirarnina well. Water goannas (djalga), who lived with Julunggul inside the log and whom he referred to as his sons, sometimes emerged to lie on the banks or to forage around for food.

In ceremonies the uwar drum is so long and heavy that it has to rest on the shoulders of several men while the didgeridoo performer blows through it. When young men beat upon the drum with their fingers it emits a strange growling noise, representing the angry voice of the Rainbow Serpent.

In this painting Jimmy has depicted the sacred rock and palm trees. 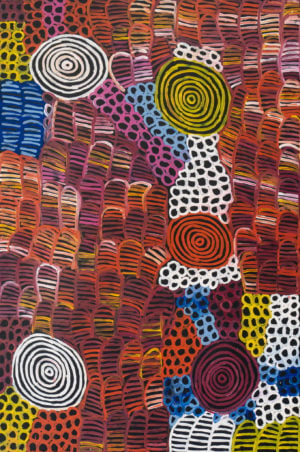 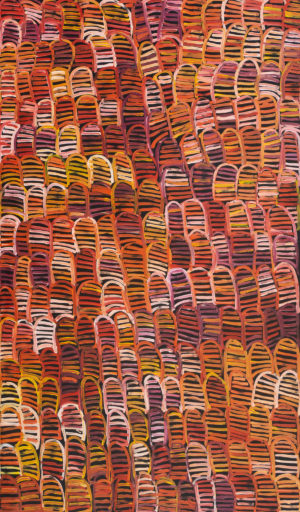 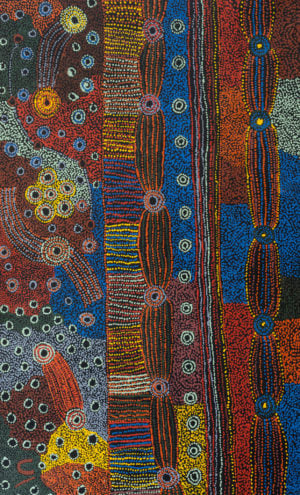 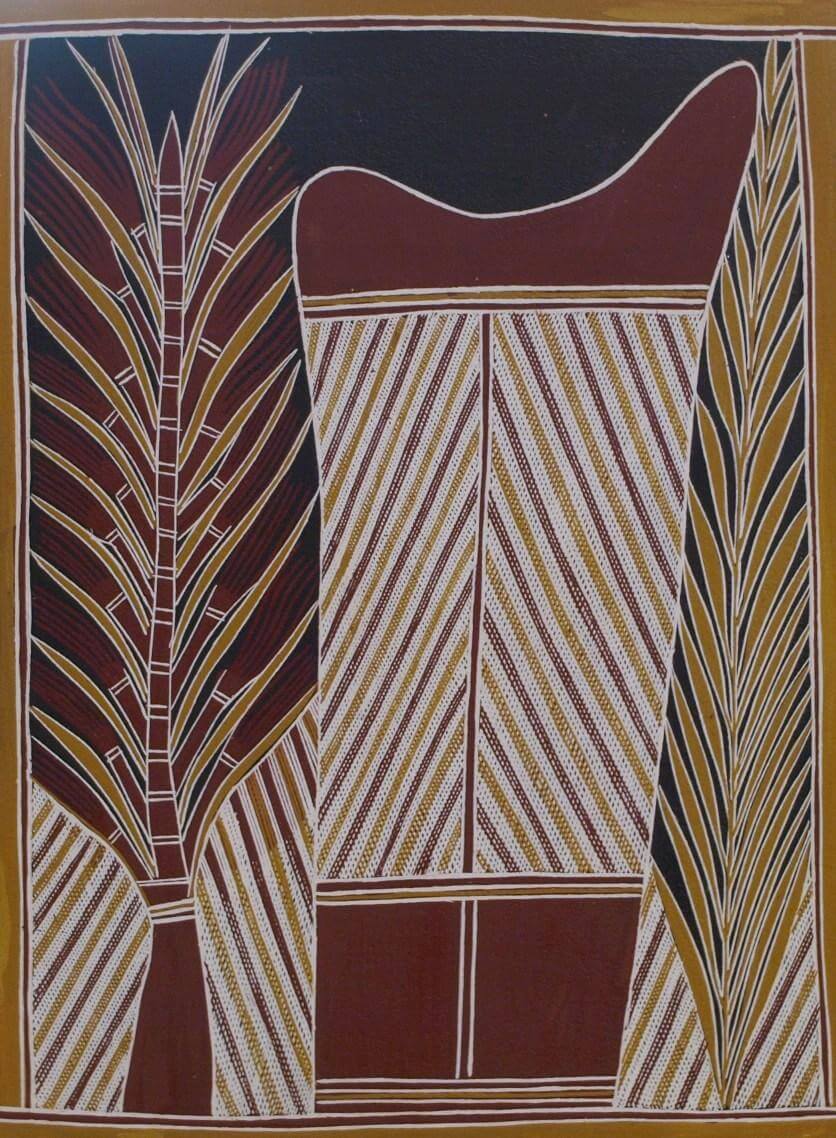