Linda Syddick is a Pintupi woman who was born at Lake MacKay in the Gibson Desert, WA, in 1937. Her Aboriginal name is Tjunkiya Wukula Napaltjarri. Linda was raised in the traditional nomadic fashion until the age of eight or nine, when her family walked out of the desert and decided to settle at the Lutheran Mission at Haasts Bluff, NT.
Linda’s paintings are inspired by both her traditional nomadic life in the desert, and the Dreamings of her father and step-father. Linda’s father was Rintje Tjungurrayi and was he killed by a revenge spearing party in accordance with customary Law when Linda was about eighteen months old; she was subsequently brought up by her stepfather, artist Lankata Shorty Tjungurrayi. Before Lankata died in 1985, he instructed Linda to carry on his work and paint his Dreamings. And so it was that in 1986 Linda was taught the art of painting by her two Uncles Uta Uta Tjangala and Nosepeg Tjupurrula.
Linda often paints the Dreaming story of the Tingari and the Emu Men. The Emu Men were ancestral beings who roamed the landscape during the Dreamtime or Creation Period. The Emu was the totem of her father, Rintje Tjungurrayi and step father, Langkata Shorty Tjungurrayi. The Tingari were ancestral spirit beings, who went on very long journeys, creating much of the desert landscape in Central Australia, and instructing the people about law and custom.
Linda paints country mostly around Lake MacKay, which has been central to the cultural and spiritual life of the Pintupi people for thousands of years. People used to camp around its shores during their seasonal journeys and gather there for ceremonies. Lake MacKay was where Linda was born and travelled for most of her early childhood. it is a large dry salt lake which straddles the WA-NT border, north-west of Kintore. Occasionally it fills with water and becomes blue, ‘like sea water’. When this occurs birds and animals flock to the area.
Linda incorporates many perspectives and stories into a single painting. The land and country are always portrayed in an aerial perspective, the way of traditional Pintupi sand paintings, but the figures are painted straight on, like they would appear if painted on a cave wall. The spirits that Linda paints are very important and are based on the spirits that are depicted in the rock art at Tjindara, a place deep into WA from Lake MacKay which is often visited by Pintupi people. These paintings are reputed to be more than fifteen thousand years old.
Selected Collections
• National Gallery of Australia
• Art Gallery of New South Wales
• Art Gallery of South Australia
• Auckland City Art Gallery
• Museum and Art Gallery of the Northern Territory
• Artbank, Sydney
Selected Awards
2009
• Finalist, 26th National Aboriginal & Torres Strait Islander Art Award
2008
• Finalist, 25th National Aboriginal & Torres Strait Islander Art Award
2006
• Finalist, 23rd National Aboriginal & Torres Strait Islander Art Award
1995
• Finalist, 12th National Aboriginal & Torres Strait Islander Art Award

Linda Syddick has painted the great Tingari narrative of her ancestral homelands near Lake Mackay in the Gibson Desert. This story depicts Linda’s two Tjapaltjarri grandfather spirits (Tingari Men) returning to their birthplace. The circle outlined in blue represents Walukuritje rockhole, a reliable source of water.

Linda Syddick has painted the great Tingari narrative of her ancestral homelands near Lake Mackay in the Gibson Desert. This story depicts Linda’s two Tjapaltjarri grandfather spirits (Tingari Men) returning to their birthplace. The circle outlined in blue represents Walukuritje rockhole, a reliable source of water. 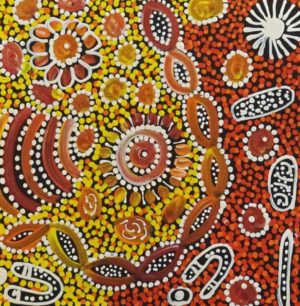 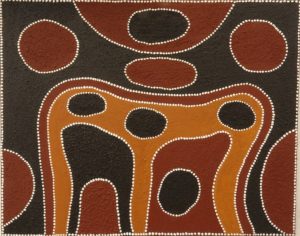 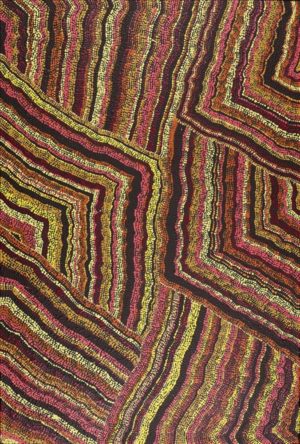 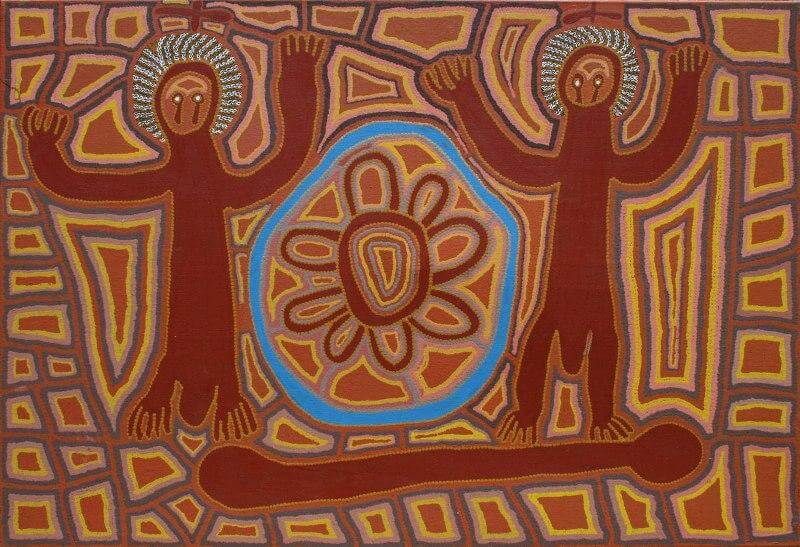