REFLECTIONS BY MELANIE HAVA
Artlandish is delighted to have acquired these paintings by Melanie Hava that formed part of her recent exhibition “REFLECTIONS” AT UMI Arts Michl and Missi Galleries, Cairns.

About her “Reflections” series Melanie says:
I am inspired by my grandmother, Doreen Costigan and the stories she has from growing up as a child within a Rainforest Aboriginal family group. Her grandad Duginyoh known as Paddy Brooks, is recognised as one of a dozen Apical Ancestors in the Mamu Native Title Determination (2013), and Brooks Road Mungalli via Millaa Millaa (Far North Queensland) is named after her father, the first white settler in that part of the Wet Tropics region. These are incredible stories, reaching back through the generations to settlement and traditional lifestyles, stories about people and place and history, and most of all perhaps, stories about culture.

My family’s traditional estate on my Grandma’s side is from Millaa Millaa eastwards down the Palmerston Highway along the North Johnstone River catchment which forms the heart of Mamu country and is one of nine in this significant tropical rainforest region. Grandma’s family stories are located in this country and at Mariah Creek north of the Walter Hill Conservation Range where she was born, and also at Yarrabah Mission where her mum and sisters were removed to from their white father for a time.

These paintings are a new direction for me, being the first time in which I have intentionally painted and exhibited landscapes and people. I came to our ancestral home and hugely extended rainforest family mob in 2010, deliberately so I and my children could spend time with our people and absorb more of our rainforest cultural heritage. I’ve painted this new experience, more so because I am encouraged to do it by family and cultural networks.

With this exhibition I have felt immense satisfaction working with my Grandma to paint her memories, and seeing her coming alive in telling them – passing the family stories along and loving it. She and her sister, my Nana Lola, are now themselves the matriarchs, the senior Elders, linking the now generations with our Mamu Ancestors and our line of connection with our traditional estate; Mamu tropical rainforest country. It is now recognised as World Heritage for all humanity. It is an important honour to be able to absorb these stories, paint them, and contribute to the telling for all our people who live here, for those who visit our region, and for our future generations.

Grandma says they never went past this “jowra” waterhole “ngagu” in the Beatrice River tributary of the North Johnstone River. The old people camped in a small cave “dinggan” up the top of a steep hill overlooking this deep waterhole. Grandma and her “muynggalgan” eldest sister Mabel and her “jaman”, younger sister Lorna had to be careful climbing up to the camp “mija”. Their Grandad Paddy/Duginyoh told the girls they must never fall into this “jowra” waterhole because the turtle “banggurru” (or it might be the bigger one “wurrigay”) would take them down to the bottom of this “jowra” to “Yamani”, our name for the Rainbow Serpent Ancestral Being residing in the landscape. “Yarmani” is also the word for rainbow, as well as for a long thin worm creature living in freshwater. When Yarmani is about the Ancestral Being it’s a strong and powerful story. I’m told that in the 1970s Grandma’s Auntie Winnie/Chiperrooh also talked about “Yamani” in this place.

Grandma says they never went past this “jowra” waterhole “ngagu” in the Beatrice River tributary of the North Johnstone River. The old people camped in a small cave “dinggan” up the top of a steep hill overlooking this deep waterhole. Grandma and her “muynggalgan” eldest sister Mabel and her “jaman”, younger sister Lorna had to be careful climbing up to the camp “mija”. Their Grandad Paddy/Duginyoh told the girls they must never fall into this “jowra” waterhole because the turtle “banggurru” (or it might be the bigger one “wurrigay”) would take them down to the bottom of this “jowra” to “Yamani”, our name for the Rainbow Serpent Ancestral Being residing in the landscape. “Yarmani” is also the word for rainbow, as well as for a long thin worm creature living in freshwater. When Yarmani is about the Ancestral Being it’s a strong and powerful story. I’m told that in the 1970s Grandma’s Auntie Winnie/Chiperrooh also talked about “Yamani” in this place. 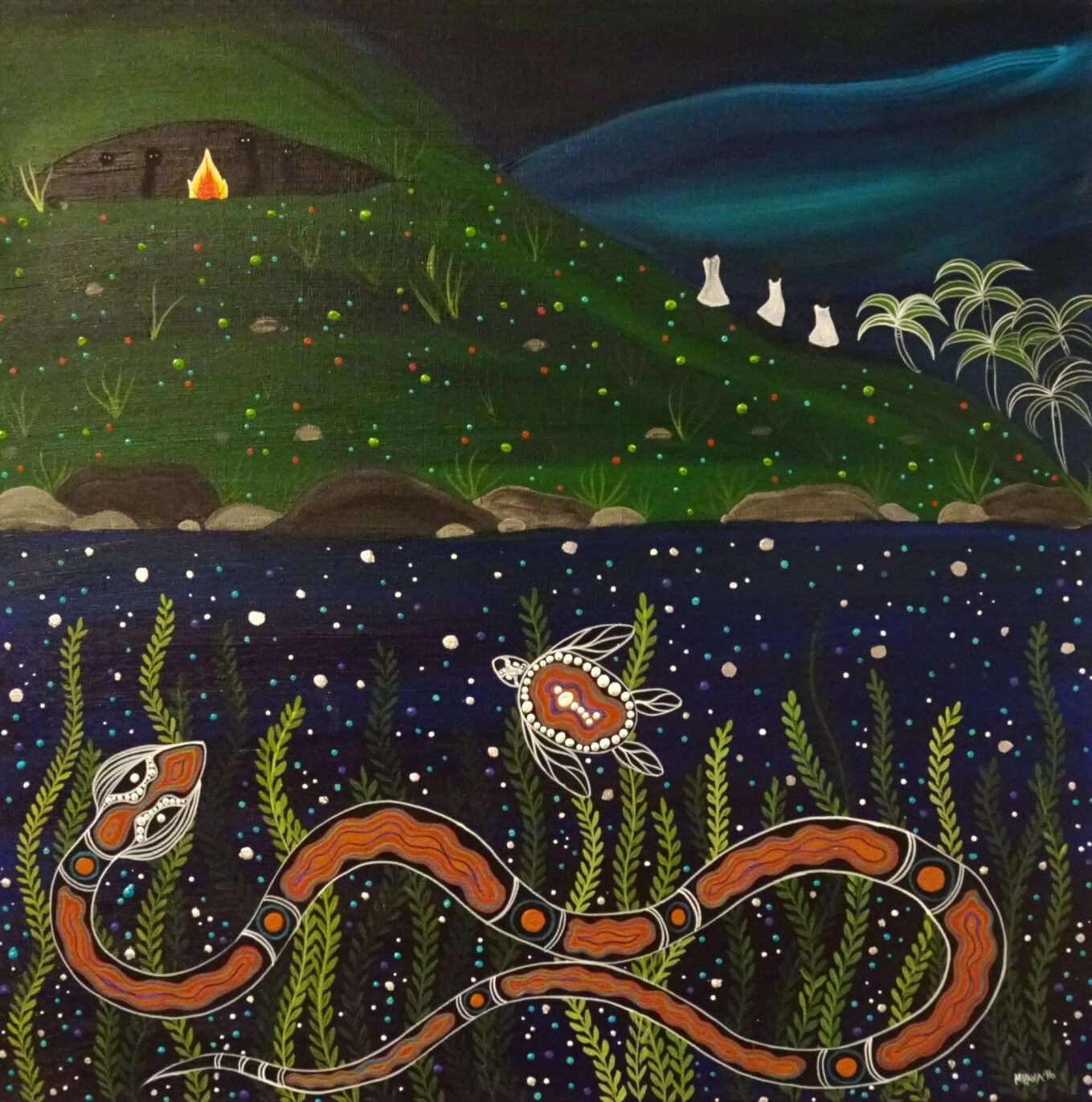