During a career that spanned almost three decades Mick Namarari became a towering presence, whose variety of subjects and diversity of stylistic approaches kept him at the forefront of Western Desert painting. Geoff Bardon noted his ability as a painter from the earliest days of the movement when he ‘could often unexpectedly be found late at night working away at his meticulous and marvellous paintings’ (Johnson 2000: 191). Much later, he was to play a quiet but decisive role in instigating the Papunya Tula art movement’s increasing ethereal minimalism of the late 1980’s and 1990’s and in doing so significantly fueled the international reputation of Australian Aboriginal art, thereby earning himself an ‘incomparable place’ in Australian art history.

During his childhood, Namarari travelled with his parents to many of the key sites through Pintupi country until a tribal raiding party speared and killed his father and his mother threw herself into a fire in grief. After recovering his mother, Maiyenu, and her two children were cared for by other family members who set up camp at Putati Spring south west of Mount Leibig. Namarari later attended school in the mission at Hermannsburg. He worked in the cattle industry at Tempe Downs, near Areyonga, and at Haasts Bluff, where he married his first wife. During this time he would often ‘go bush’ for extended periods, taking just a spear and a womera to hunt for food. Older Pintupi men taught him the songs and ceremonies associated with his childhood journeying and, after initiation into manhood, he was given the responsibility for maintaining the knowledge and ceremony of many ancestral sites.

Resettled at Papunya, and serving on the community council with Johnny Warangkula and Nosepeg Tjupurrula in its early tumultuous days, Namarari’s ability as a painter was noted by Geoff Bardon’s from the outset of the modern desert art movement. Driven to paint, regardless of the materials at hand, his early paintings were closely tied to narrative. Symbolic designs were painted, often on a rich, earthy background, with a sharpness of line that imbued them with a remarkable clarity. The key formal elements provided the basis for his later works as he constantly explored and expanded upon their aesthetic potential. He would unravel endless variations on one Dreaming story by focusing on different aspects of its telling. His inventive array of techniques demonstrated a singular and personally felt perspective that always managed to take his audience by surprise.

In 1978 he played the leading role in Bardon’s film Mick and The Moon. The film told of an Aboriginal man who believed he owned the moon, but had a duty to paint ceremonial pictures in order to make this belief become true. His moon paintings of this period have an omniscient perspective, revealing a cosmology where the human world and the landscape are continuous with each other rather than being defined against each other, as in the European tradition. He depicted landscape by ‘invoking a whole cosmology, a religious morality and an ethics of social interaction’ (Clark 2005: 62). This broader spiritual meaning shaped the way Namarari perceived relations between the human and non-human world. Visually this consciousness manifested itself in Namarari’s art, most especially in his non-figurative and non-iconographic paintings, exemplified by his Mouse Dreaming paintings, in their representation of space. The hypnotic minimalist fields of dots suggest the ‘microscopic life of the desert’ (Johnson 2000: 191), and the intimate placement of the artist within his subject, not apart from it. One of the few artists to stay on in Papunya after the Pintupi exodus of the early 1980’s he finally settled at Nyunmanu near Marnpi with his second wife Elizabeth Marks Nakamarra and their three children. However the need to support his young family through his burgeoning art practice saw Namarari move in to Kintore and travel more frequently to Alice Springs from the late 1980’s onward, by which time his paintings were increasingly sought after by galleries.

Mick Namarari was credited as having played the decisive role in propelling Papunya Tula art away from the edifice of Tingari cartography towards the ethereal minimalism of the 1990’s. In 1989 he attended the opening of the exhibition Mythscapes at the National Gallery of Victoria and two years later his triumph in winning the 8th National Aboriginal Art Award in 1991 became an important milestone both personally, and for the Papunya Tula Artists company. His stature grew following solo exhibitions at Gallery Gabrielle Pizzi in 1991 and 1992 and with Utopia Art Sydney in 1993 and 1994. These exhibitions demonstrated his capability for ongoing innovation and also proved the viewing audience’s appreciation for the distinct individuality of his signature style. By this time, Namarari had condensed his symbolism into a densely worked abstract code that reflected the microscopic life of the desert amid its shimmering contours and ephemeral shifting light. Dazzling surfaces, often composed of subtle currents of yellow and white fingertip stipple, suggested an emerging form, an invisible ancestor palpably present within the meticulously applied paint.

While Namarari remained loyal to Papunya Tula artists he painted a number of major works outside of the company during the mid to late 1990’s most importantly several masterpieces for independent dealer Steve Nibbs, that found their way in to important galleries and collections. During his later years, Namarari helped transmit to a new generation of rising artists, the knowledge and techniques that play a crucial role in the regeneration of Aboriginal culture to this day. He increasingly returned to his outstation at Nyunmanu, close to his original homelands. It had been his ‘yearning for return to country’ (Kean 2000), that had always informed his work. It was that loss of contact with country that had imparted such a raw power and poignancy to those early Papunya paintings, prompting Bardon to act so courageously in the face of bureaucratic opposition. Namarari lived to see the fruition of that yearning, enabling his Pintupi clansmen to return to their country, supported by art sales and favourable changes in government policies. The exodus was documented in the film Benny and the Dreamers 1993, in which Namarari describes his first encounter with Europeans. Within the framework of that vital tethering to country, Namarari’s career moved through many phases, due in part to his custodianship of many totemic sites, but also largely to his unique and ingenious approach. He was a quiet character, Bardon later recalled, and ‘of the briefest conversation’ (Bardon, 2004). He much preferred to remain at home with his wife and many adopted children rather than travel the circuit of openings and awards. In his last works, narrative and abstraction had found their perfect synthesis. He was acknowledged as an ever-evolving master, whose consistency and brilliance was confirmed by the presence of his work in galleries and collections in Australia and around the world. Mick Namarari was the first recipient of Aboriginal Australia’s highest cultural accolade, the Australia Council’s Red Ochre Award, presented to him in 1994. 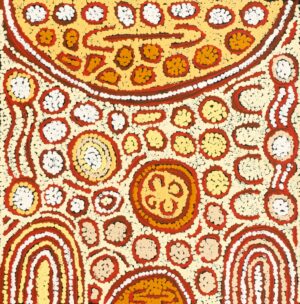 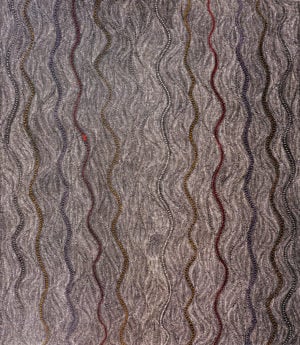 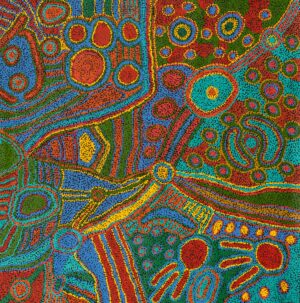 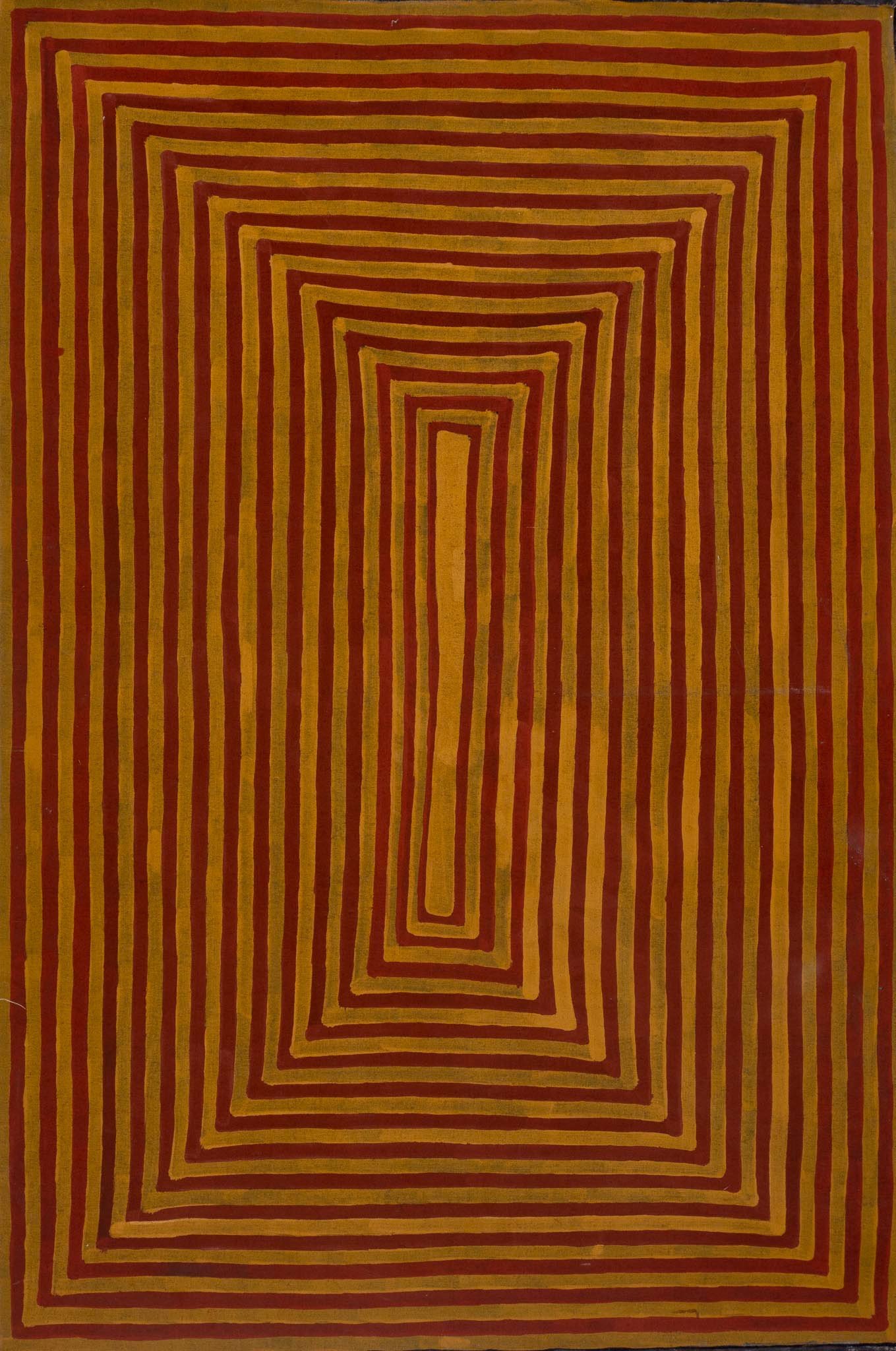