Sarrita King was born in Adelaide, South Australia on the 5th March 1988.  She is the younger sister to fellow artist, Tarisse King and daughter to the late highly regarded artist, William King Jungala (1966 – 2007).

Sarrita inherits her Australian Aboriginality from her father who was part of the Gurindji tribe from the Northern Territory.  The Gurindji tribe came to public attention during the 1960s and 1970s when members employed by the Wave Hill cattle station led a landmark case which became the first successful land rights claim in Australia.  It is this same strong sense of self and pride that Sarrita embodies and it fuels her drive to paint her totemic landscape.

Sarrita spent most of her youth growing up in Darwin in the Northern Territory, not far from where her ancestors inhabited and it is here that her connection to her Aboriginality and subsequently the land was able to grow.  Her exposure to the imperious weather and extreme landscape has provided the theme for her works of art, since she began painting at age 16.  Rolling sand hills, cracking lightning and thunderstorms, torrential rain, fire, desert and tangled bush are all scathing environmental factors that shaped her forefather’s lives and also her own. Depicting these elements in her paintings, Sarrita provides a visual articulation of the earth’s language.

Stylistically, Sarrita utilises traditional Aboriginal techniques such as ‘dotting’ but also incorporates unorthodox techniques inherited from her late father, as well as self-developed practices.  Her art is a fusion of the past, present and future and represents the next generation of artists who have been influenced by both their indigenous history, and current Western upbringing.  Sarrita creates frenetic energy on the canvas with her Lightning series and searing heat with her Fire series.  Her artwork has a universal appeal and provides an entry point for people to experience the power and uniqueness of the Australian landscape and its harsh climate. On a world scale, her depictions couldn’t be more seasonable and well-timed.

After 3 years living and painting in Canberra, Sarrita and her husband returned back to Darwin in 2017 where she spent most of her childhood and welcomed their first child Steele. In late 2018, her second son Grange was born. Only in her early 30’s, Sarrita King has many personal achievements but it is her desire to visually communicate her inspiration and the land, which keeps her ancestral narrative alive and provides a new way of looking back while looking forward.

• 2014, AFL Indigenous Round, Sarrita was commissioned by the North Melbourne Football Club to paint their 2014 Guernsey. It was so popular that the team wore it again the week after the Indigenous round.

Sarrita paints the naturally occurring waterholes she remembers travelling around Alice Springs and Katherine. The scarcity of drinking water in certain regions means specific knowledge of where these waterholes are located, as well as their preservation methods,is paramount to survival. Today, Aborigines speak of where waterholes once were as many of them have dried up due to drought or diminished maintenance.

When Sarrita travelled to see the waterholes with her father she saw many of them dried up and this is what she paints. Represented by the concentric circles, the waterholes are fed by underground streams pushing through land and rock. Sarrita shows these streams by ribbons of wavy lines intricately entwined across the canvas as muddy and dried ochre colours, just as she experienced them.

Sarrita paints the naturally occurring waterholes she remembers travelling around Alice Springs and Katherine. The scarcity of drinking water in certain regions means specific knowledge of where these waterholes are located, as well as their preservation methods,is paramount to survival. Today, Aborigines speak of where waterholes once were as many of them have dried up due to drought or diminished maintenance.

When Sarrita travelled to see the waterholes with her father she saw many of them dried up and this is what she paints. Represented by the concentric circles, the waterholes are fed by underground streams pushing through land and rock. Sarrita shows these streams by ribbons of wavy lines intricately entwined across the canvas as muddy and dried ochre colours, just as she experienced them. 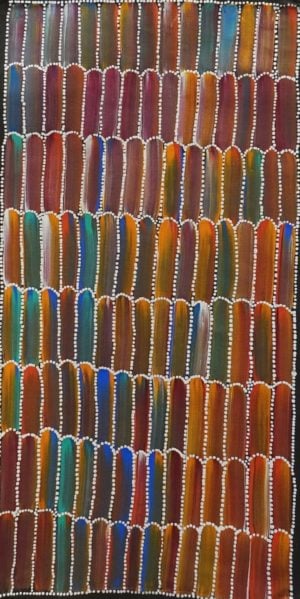 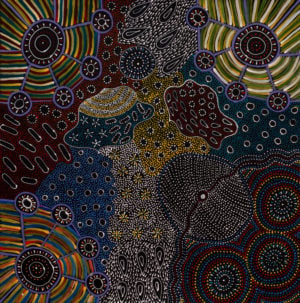 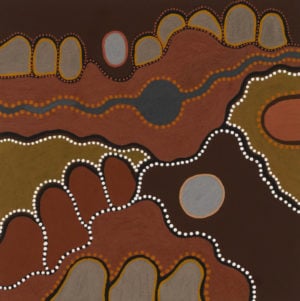 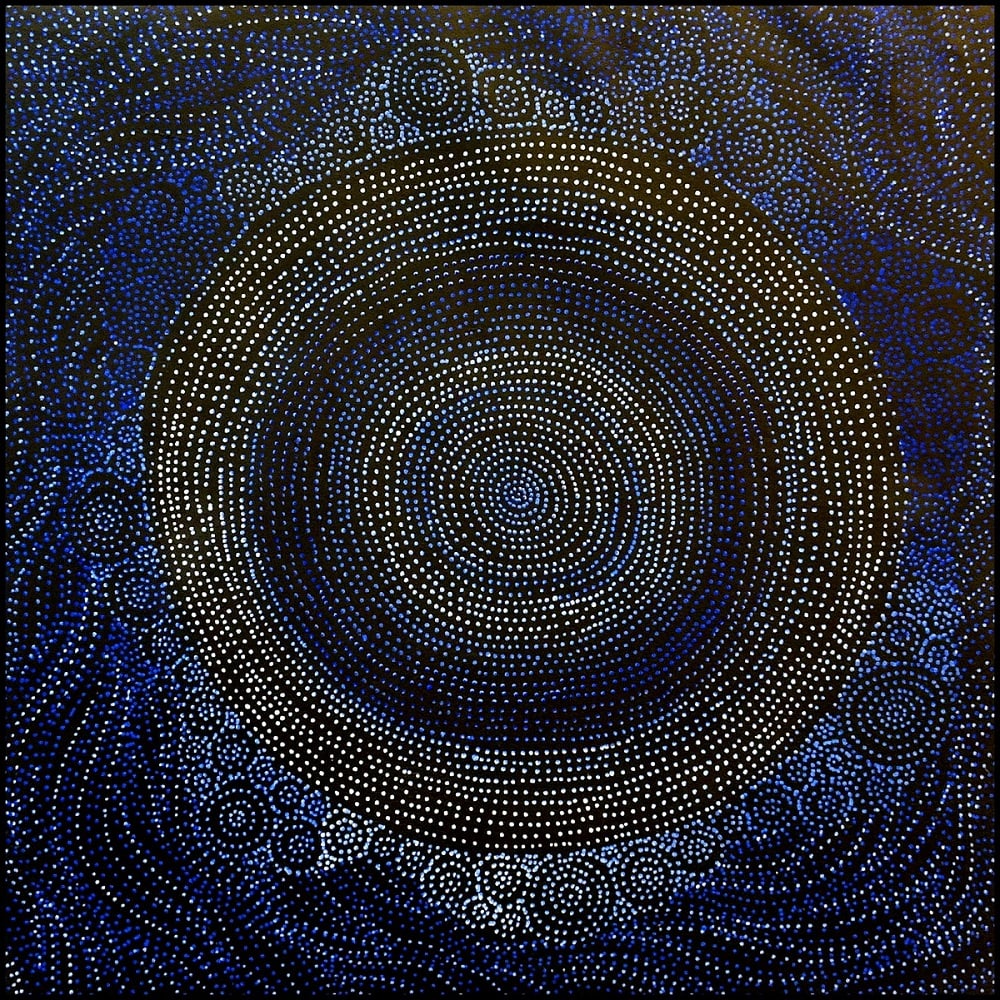