Most of the interior of Western Australia, northern South Australia and southwest corner of the Northern Territory are part of the Western Desert region.

Throughout this area are Aboriginal communities that are amidst Australia’s most abundant and talented art creators.

Within the Western Desert region the people are relatively similar in many ways. They speak similar dialects acknowledged as the Western Desert language. Many share a similar history with their association with white people. They are also frequently related though marriage and family links.

In the last 20 years there has been a massive increase in art centres across the Western Desert which has made for a huge diversity in art form.

Established in 2005 the Warakurna Art Centre was formed and apart from being a fast growing art centre it also now incorporates story telling/dreaming to show the community the meanings of their paintings.

Apart from the Tjukurrpa (Dreaming) paintings, the artists are including subjective historical and contemporary narratives about their lives in the community.

The paintings from this collection were done in 2007 and convey the story of the Canning Stock Route’s bearing on Aboriginal people and the importance of the Country that surrounds it.

It is via these works of senior and emerging artists and the stories of traditional custodians that the stories are told. The reveal the contact, conflict, survival, departure and return of the Aboriginal people seen through their eyes, and interpreted through their voices, art and new media. 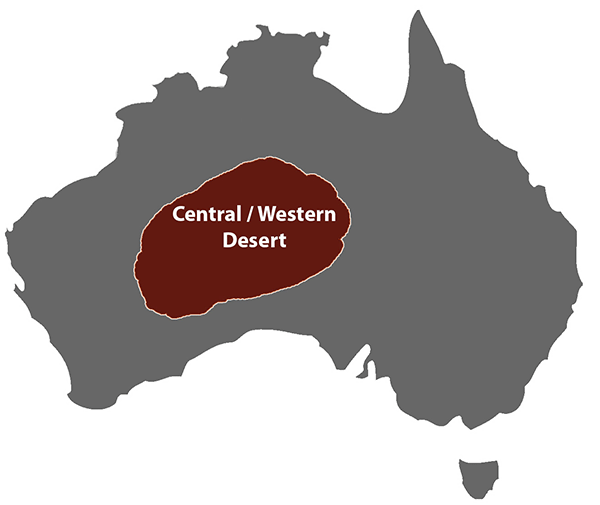 Papunya and the origin of Western Desert art

The beginning of the Western Desert style of painting was linked to the Geoffry Bardon influence of the 1970s.

Australian school teacher Geoffrey Bardon dedicated 18 months in the early 1970s to the remote Aboriginal settlement of Papunya. Papunya is located 240 km west of Alice Springs. Geoffrey was the influencing factor in cultivating the early days of the Western Desert aboriginal art movement.

From modest and very trying beginnings, the movement supported by Bardon went on to achieve significant international success. This art became a bond between two cultures and has shown the way for more exploration, understanding and respect for traditional Aboriginal culture.

The first decade of Western Desert art undoubtedly establishes the role painting served in facilitating groups like the Pintupi to return to their traditional homelands.

The first paintings from Papunya were merely a transformation of the established form of rock painting and drawings in the sand to a brand new exciting medium.

The new way of painting with acrylic had caused the Western Desert region to expand their horizons.

The style of painting became far more free flowing and less formal in the 1990s with more colour than ever used. The Canning Stock Route collection is a great example of this. For the most part the Tjukurrpa beings remained the subject matter of their paintings and their travelled country.

Western Desert Art is known for the use of iconography to portray the meanings of their paintings but there has always been a metaphorical part. In the early days many Papunya paintings were bold in their portrayal of stories often of which should not have been left so naked to the Westerners eye.

Later less symbolic art was produced by the artists in an attempt to hide the more dangerous and sensitive aspects of their work and therefore their culture.

This is part 1 of a series of articles on the central / western desert art and artists that we will be released over time.