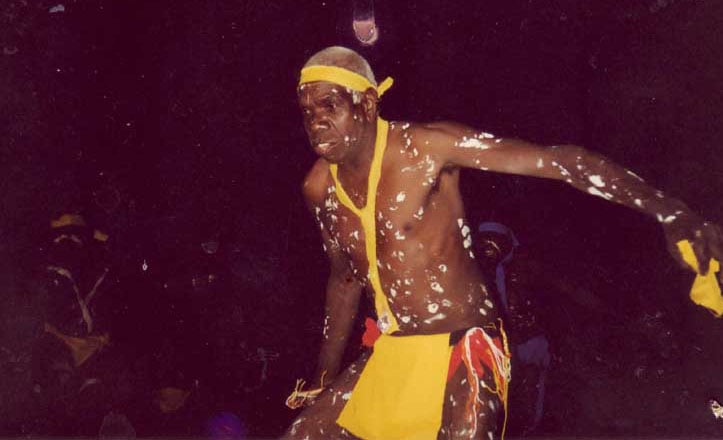 Dreamtime or Dreaming for Australian Aboriginal people represents the time when the Ancestral Spirits progressed over the land and created life and important physical geographic formations and sites.

Aboriginal philosophy is known as the Dreaming and is based on the inter-relation of all people and all things. The past of the Spirit Ancestors which live on in the legends are handed down through stories, art, ceremony and songs.

The Dreaming explains the origin of the universe and workings of nature and humanity. It shapes and structures life through the regulation and understanding of family life, the relations between the sexes and obligations to people, land and spirits.

Before European settlement of Australia, there were around 600 diverse Aboriginal populations, based on language groups.

Australian Aborigines have the longest continuous cultural history of any group of people on Earth. Educated estimates date this history around 50,000 years. leo. 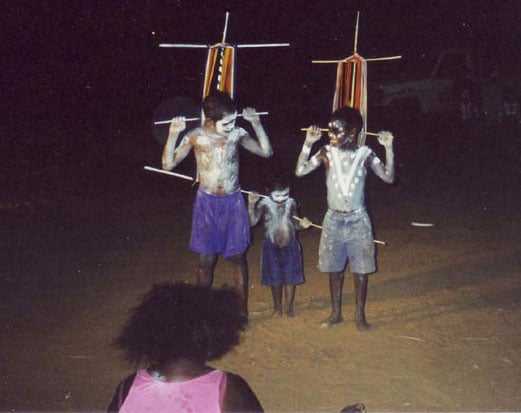 Aboriginal people disclose their Dreaming stories to pass on imperative knowledge, cultural values, traditions and law to future generations. Their Dreamings are passed on through various customs such as ceremonial body painting, storytelling song and dance.

The Australian Indigenous people have over thousands of years maintained a link with the Dreamtime and Dreaming stories of the past to the present.  Due to their customs and beliefs they have sustained a rich cultural heritage.

None of the hundreds of Aboriginal languages contain a word for time.  When we try to explain in English their philosophy we are perhaps best not to use the term ‘Dreamtime’ but use the word ‘Dreaming’ instead.

It conveys better the timeless concept of moving from ‘dream’ to reality which in itself is an act of creation and the basis of many Aboriginal creation myths.

The ‘Dreaming’ “is there with them, it is not a long way away. The Dreaming is the environment that the Aboriginals lived in, and it still do today. It is important to note that the Dreaming always also comprises the significance of place.

The Dreaming, or ‘Tjukurrpa’, also means to ‘see and understand the law’ as it is translated from the Arrernte language (Frank Gillen with Baldwin Spencer, translating an Arrernte word Altyerrenge).

In most stories of the Dreaming, the Ancestor Spirits came to the earth in human form and as they moved through the land, they created the animals, plants, rocks, rivers, mountains and other forms of the land that we know today.

These Ancestral Spirits also formed the relationships between Aboriginal people, the land and all living beings.

Once the ancestor spirits created the world, they transformed into trees, the stars, rocks, watering holes etc. These are the sacred places of Aboriginal culture and have special meaning.

Because the ancestors did not disappear at the end of the Dreaming, but remained in these sacred sites, the Dreaming is never-ending, linking the past, present and the people and the land.

Dreamings allow Aboriginal people to understand their place in traditional society and nature, and connects their spiritual world of the past with the present and the future. 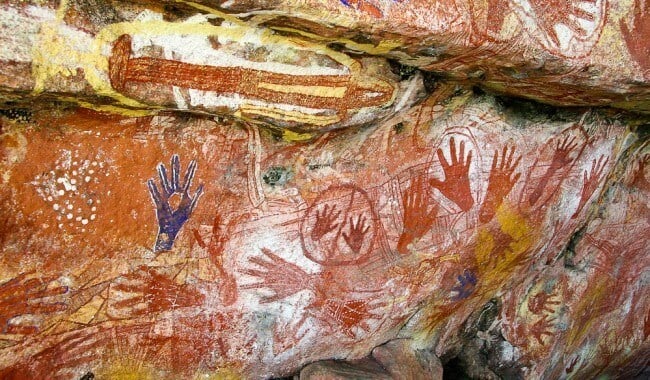 The Dreamings explain the creation process. Ancestor beings rose from the earth and seas and roamed the initially barren land, created the land’s features and then returned to the land to become part of its features in the form of rocks, waterholes, trees etc.

These became sacred places, to be seen only by initiated men.”

The spirits of the ancestor beings are passed on to their descendants, e.g. shark, kangaroo, honey ant, snake and so on and hundreds of others which have become totems within the diverse Indigenous groups across the continent.

Aboriginal families and individuals identify with a specific Dreamings. It gives them identity, dictates how they express their spirituality and tells them which other Aboriginal people are related to them in a close family.  They can share the same Dreamings so this means that one person can have multiple Dreamings.

“Stories of the Dreaming” have been handed down through the generations, they are not owned by individuals but belong to a group.

The storytellers are chosen by the Elders who have the duty to pass the stories along, ensuring that young people build and retain a sense of who they are.

The journey of the Spirit Ancestors across the land are recorded in Dreaming tracks.

A Dreaming track joins a number of sites which trace the path of an Ancestral Being as it moves through the landscape, forming its features, creating its flora and fauna and laying down the Laws.

These Spirit Ancestors include the Rainbow Serpent, Wandjinas, Mimi Spirits – fairy-like beings of Arnhem Land, Karatgurk – Seven sisters who represent the Pleiades star cluster, These Dreamings are passed down and shared by many Aboriginal communities across Australia. 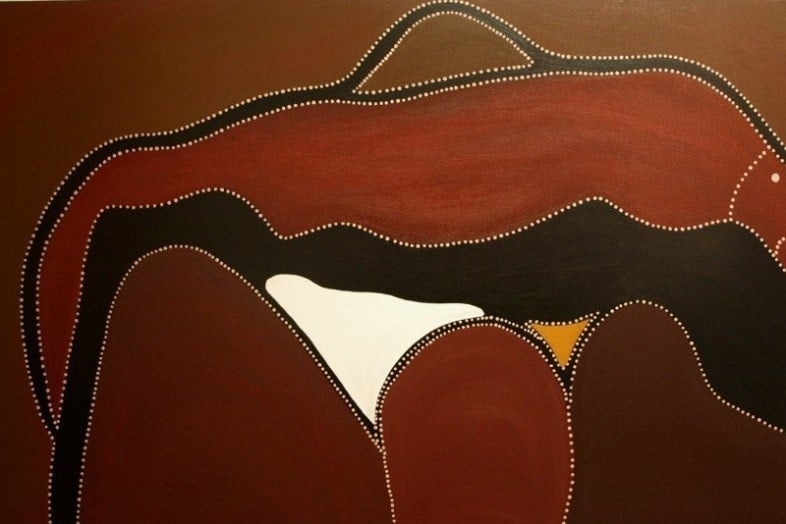 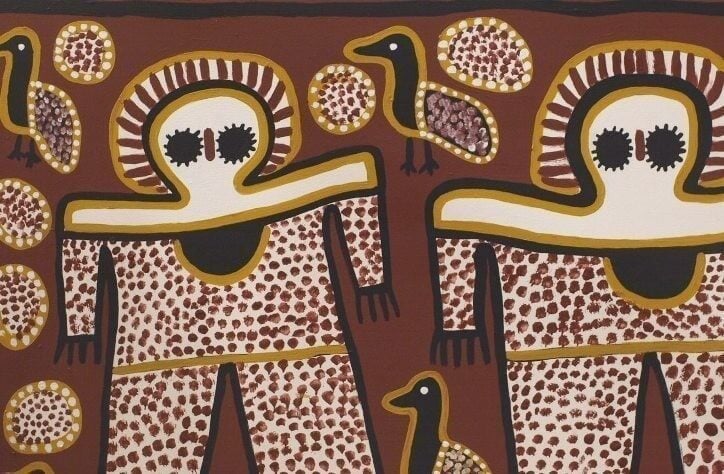 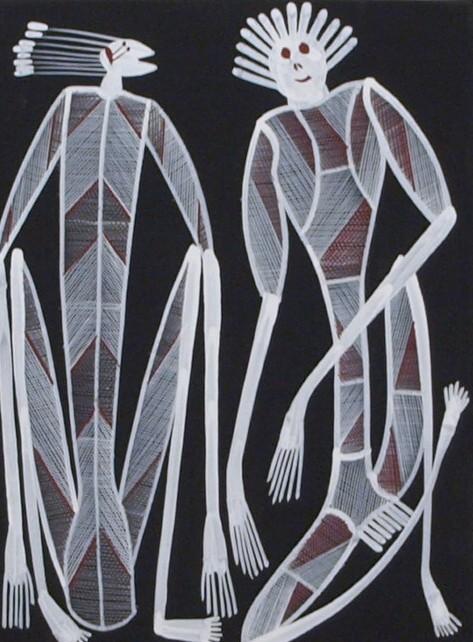 Traditionally, Dreaming stories would be told through mediums such as the haunting sound of the didgeridoo with song and dances and also by symbolic drawings.

These designs were used as body paint decorations for corroborees and as sand paintings for ceremonies.

Today paintings are created using traditional ochre and modern-day materials, but the use of traditional symbols and art styles keeps this ancient culture alive.

The symbols used in contemporary Aboriginal paintings are the same as those found on cave paintings and rock Art.

The same obligations to pass on their own Aboriginal cultural dreaming story is depicted in Aboriginal Art. It is a visual expression of these beliefs and a way to preserve their culture, beliefs and history.