It is stated that Australian Aboriginal art is the oldest living art practiced in the world.

Dreamtime is the chief inspiration extensively for Aboriginal art. The Dreamtime educated the people about their moral laws, beliefs, philosophies and politics and ceremonies through legends, myths, magic, dance, painting and song. This has been passed down through generations by storytelling.

Aboriginal art is regional in character and style, so different areas with different traditional languages approach art in special ways. Much of contemporary Aboriginal art can be readily recognized from the community where it was produced. 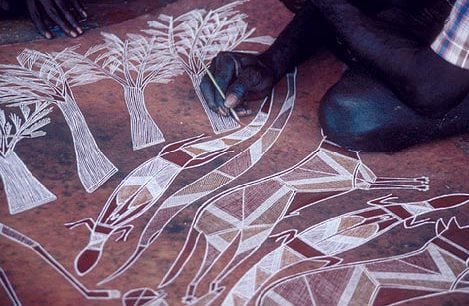 In Northern Australia (Arnhem Land NT) Aboriginal x-ray art is a traditional style used to depict local animals and stories. Many of the animals are painted showing some anatomical features, that is, painted in x-ray.

X-ray art shows the artist’s connection and understanding of his country and its inhabitants. The delicate depiction of bone structures and internal organs gives the picture a three-dimensional effect. 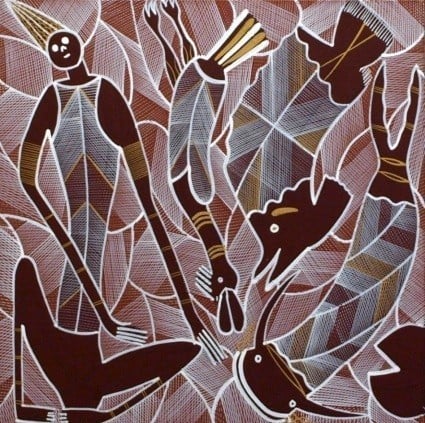 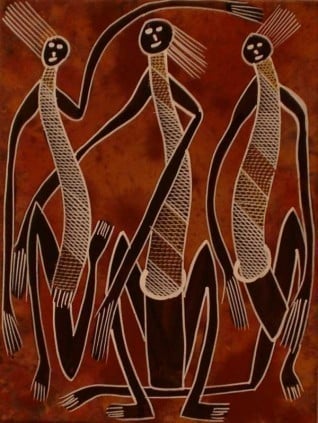 Common in Northern Australia and known also as Rarrk paintings, these works are believed to hold great spiritual power.

The rarrk is a unique feature of Kunwinjku Aboriginal art. Fine-line cross-hatching is used in representations of sea creatures and reptiles such as barramundi, turtles and water reptiles. Hair-like bristles are used that are found inside the stem of a reed, or human hair itself is used to meticulously paint the rarrk’s fine detail. It was originally traditional ceremonial painting, and today the Kunwinjku artists use rarrk to signify these traditions. 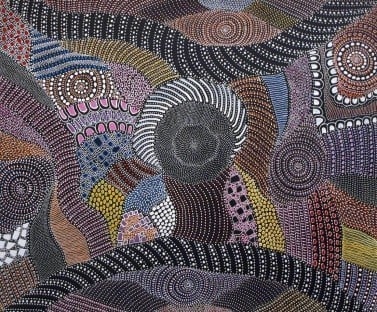 Central Australian paintings take on a more abstract style, originating from sacred designs used in ceremonies. Dot painting which varies from the finest of dot work made with thin sticks, to larger bolder dots making up varying designs of earthy to very colourful dots. This type of style typifies Aboriginal Art in most people’s minds.

It comes from body painting in dance ceremonies (dots) and ground paintings, which were then transferred to canvas in the 1970s during the Papunya Tula Art Movement. 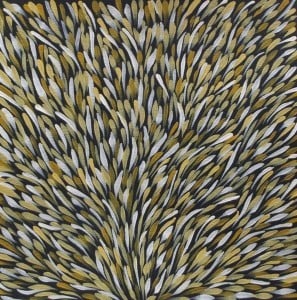 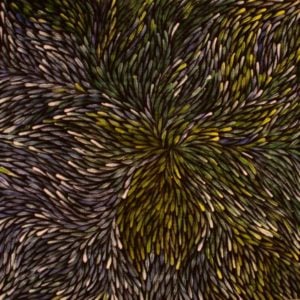 This beautiful style was made famous by Gloria Petyarre’s winning artwork in the coveted Telstra National Aboriginal & Torres Strait Islander Art Award in 1999. 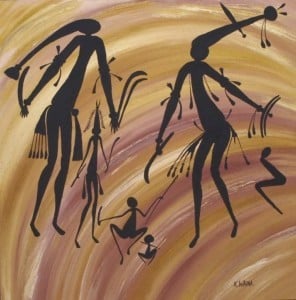 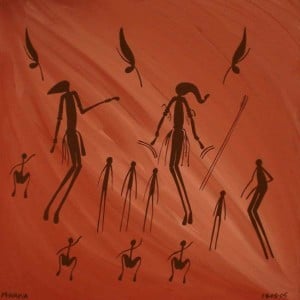 Controversy, intrigue, conflicting information and confusion surround this amazing style of Aboriginal art. Much research has been conducted to discover the origins of these figures and a clear answer may never be possible.

A number of Indigenous groups traditionally from the area the Bradshaw’s are found believe they are not the work of the Aboriginal people and that they predate their arrival to Australia and were copied by the Indigenous people.

This would then require there to be an earlier group of humans than the Aboriginals calling this land their home?

Then there are conflicting reports such as the beliefs of one of the most famous of all Bradshaw painters Kevin Wainer, who assures us they are the work of his Aboriginal Ancestors.

Bradshaw figures are symmetrical, mystical, sometimes shown with detailed head-wear including the distinct cone shapes and “knots” that depict an opulent and refined style. Bradshaw’s are also shown hunting and ceremonial dancing in their artworks and Kevin Wainer adds an amazing touch by including hand prints in many of his works! 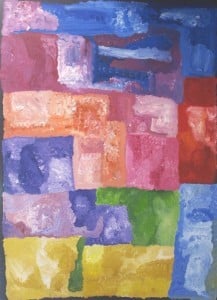 This style is used by the legendary Aboriginal artist Kudditji Kngwarreye (Emily’s younger brother). He was the first artist to paint in colour fields and is the master of this technique. His style is said to be similar to the works of Mark Rothko, a great American Modernist painter. 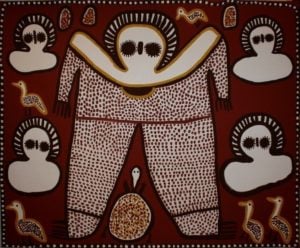 Wandjinas are only found in the Kimberley region (north-eastern Western Australia); they aren’t seen anywhere else in Australia.

They are deeply spiritual to the people of this area, the Mowanjum people, who comprise three language groups, the Worrorra, Ngarinyin and Wunumbal

Wandjinas have large eyes, like the eye of a storm, but no mouth. It is said they do not have mouths because it would make them too powerful. They are often shown with elaborate headdresses, indicating different types of storms. 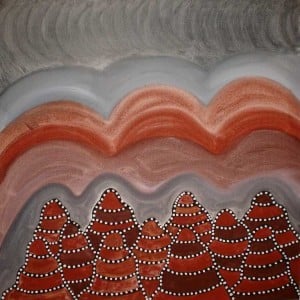 Ochre is more a medium than a style but because that medium generates a style all of its own we wanted to include it in this paper.

Ochre originates from Arnhem Land and east Kimberley. Ochre is a type of hard clay that comes naturally in many different colours such as red, pink, yellow, white and sometimes blue.

Most ochre is found between the Kimberley region in Western Australia and Alice Springs in the centre of the Northern Territory.

It is ground to a powder and then mixed with saliva, egg, water or animal fat to make paint.

Many other colours are made from the white as well as by adding different pigments, either from human or animal blood or pollen from plants.
It is the oldest type of paint used in Australia with some dating back with touch-ups several thousands of years. Rock art dates back as far as 60,000 years!