Alice Nampijinpa Michaels was born at Mt Doreen Station in 1946, a cattle station about 55km west of Yuendumu, in the Northern Territory. While her father worked as a stockman on the cattle station, she and her family would hunt and gather food in the surrounding area. Occasionally when they came across traditional Aboriginal people Alice and her family would bring them a delivery of food blankets and clothes.

In 1946, the federal government established Yuendumu community to deliver rations and welfare services to the Aboriginal people who had been working with the Labour Corps in Alice Springs during WWII.

In 1947 a Baptist mission was established there, and in the decade that followed Aboriginal people of various tribes and families from the surrounding area were forcibly relocated to Yuendumu. Alice still remembers the cattle truck that came to Mt Doreen to collect her family and many others when she was a young girl of about ten.

Alice spent the remainder of her childhood at Yuendumu, attending the missionary’s school. When she was a young woman, she married her promised husband, a man significantly older than herself.

To overcome her initial shyness in his company, they moved away together to Haasts Bluff, another community some 130km away, where Alice had no family. When they returned to Yuendumu, she brought back her first child, Kelly Napanagka Michaels, who also paints for Warlukurlangu Artists and lives in Yuendumu. Alice began working at Yuendumu council, but did not stay long as she quickly had a further three children. Alice now has a big mob of grandchildren.

With the advent of the Northern Territory Land Rights Act in 1976, many Indigenous people who had been forced to live in communities such as Yuendumu began to move back onto their traditional lands. In 1983, Alice and her young family moved to Nyirripi, a community 160km southwest of Yuendumu, along with two other families that she had lived with at Mt Doreen. She has lived both at Nyirripi and Emu Bore, an outstation a further 15km west of Nyirripi, ever since.

Alice has been painting with Warlukurlangu Artists Aboriginal Corporation, an Aboriginal owned and governed art centre located in Yuendumu, since 2006. Alice paints her father’s country at Pirlinyanu, about 170km west of Yuendumu and her grandmother’s country Lappi Lappi, near Lake Hazlett, northwest of Lake Mackay in Western Australia. When she’s not painting she likes to go hunting with her grandchildren for goanna, bush tomatoes and sweet potato.

The subject of this work is Lappi Lappi, a rock hole near Lake Hazlett, about 90 km northwest of Lake Mackay in Western Australia. The country belongs to Nampijinpa and Jangala skin groups. Located in a sheltered basin, the rock hole at Lappi Lappi is a permanent source of water, and is surrounded by country rich in bush tucker.

In the time of the Jukurrpa (Dreamtime) many mothers with young children would gather there because it was a safe place to stay. The rock hole at Lappi Lappi is home to a ‘warnayarra’, a rainbow serpent that travels underground between various rock holes. 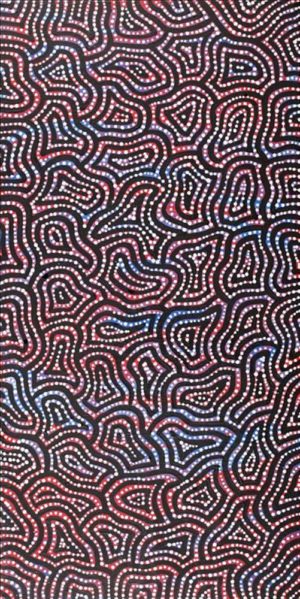 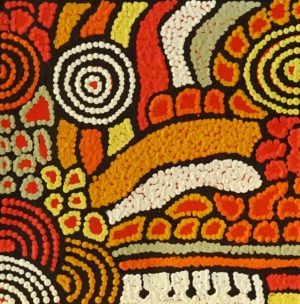 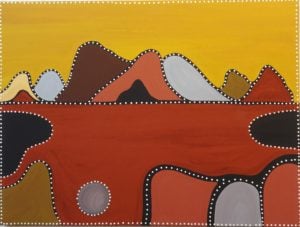 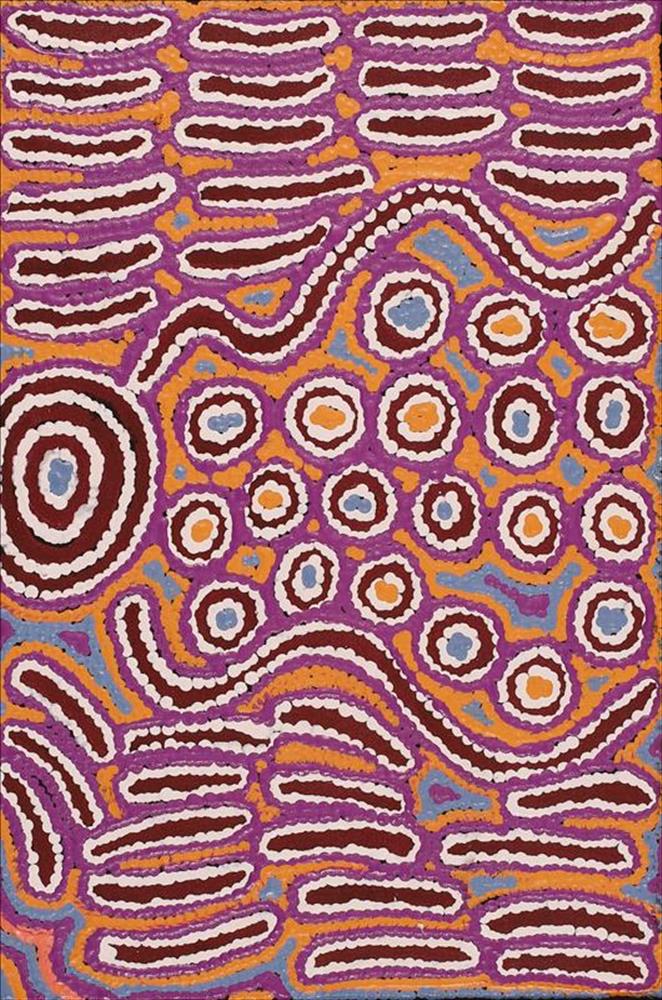