Kathleen was born c. 1930 but didn’t begin her art career until the late 1970’s in the medium of batik with over eighty other women from the Utopia Region in Central Australia. Her work in batik is featured in Utopia A Picture Story. When the acrylics on canvas movement swept Utopia in the late 1980’s, Kathleen like the other women swiftly changed mediums. Kathleen’s popularity as an artist grew in the early 2000’s, for her simplistic “Bush Plum” paintings. Her work has been exhibited around the globe and is also featured frequently in Aboriginal Art Auctions.

Kathleen loves to paint and talk about her work. Though she does not speak much English, she continues to try and teach the wider world about her paintings and the Anwekety that features in them. Kathleen refers to the Anwekety as Bush Plum, which in fact are small black conkerberries that grow on the plant after good rain.

Living with her sisters and extended family in the Utopia Region, Kathleen is encouraged by and passes her enthusiasm onto them. Artists Polly Ngale, Glady Kemarre and Angelina Pwerle are just a few family members to name.

2007
•    Patterns Of Power, Art From The Eastern Desert, Simmer On The Bay Gallery, Sydney

The Story behind the Artwork

The story of the Bush Plum told through Kathleen’s paintings reveals the natural features of the bush plum. It shows her knowledge of places such as clay pans, soakages and spinifex mounds. The women will often pay respect to the spirit of the bush plum through body paint, song lines and dance cycles during ceremonies.
Anwekety (the bush plumb) is a source of food for Aboriginal people living in Utopia and in the Eastern Desert of Central Australia.

Kathleen is a custodian of the Arlparra country. She is responsible for the Anwekety (Bush Plumb) Dreaming. This is the foremost feature of her paintings. There is as much hidden in her paintings as there is visible in the surface. Her paintings are made of up various layers of overlaid dots, creating a feeling of depth, light and movement. The under dotting shimmers through the top layers and her use of colours such as red, purple, yellow, red and green which is often merged with white to create a understated interaction. Kathleen will frequently apply a dense layer of over dotting which almost conceals the under dotting altogether. The colour is often generously applied or washed out, but then in the surface of the same canvas the over dotting can in some parts become very scarce, permitting the admirer to peer past the painting’s surface into a field of deep or ‘negative’ space. These are some substantial features of Kathleen’s paintings. 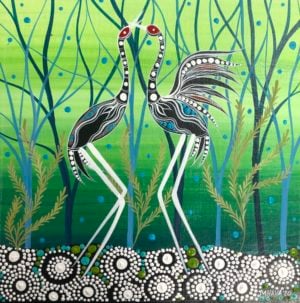 Melanie Hava / Brolgas in the Bush (2A) 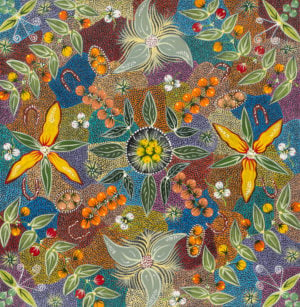 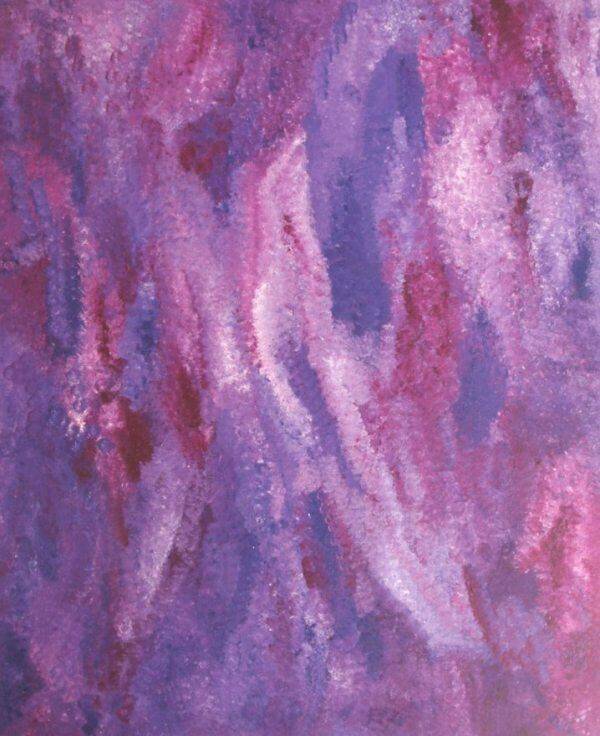