Ningura Napurrula was born at Watulka, south of the Kiwirrkura Community, circa 1938. She was married to Yala Yala Gibbs Tjungurrayi (deceased) a highly respected Pintupi elder who held significant knowledge of his country’s Dreaming stories. Together with their son Maurice they went on a journey to Yininti. Wili, Illpili, Wirrinpili and finally arrived in Papunya after encountering a Welfare Patrol, where they lived in Papunya’s Pintupi camp for many years.

Yala Yala was one of the founding artists who started the Papunya Tula Art movement in the early 1970’s and on occasion Ningura assisted Yala Yala with his works. Whilst the Master Painter executed the iconography, his wife was allowed to execute the infill (to dot in the background). This practice was quite acceptable and introduced the senior women to the art movement of the time. Ningura observed the male artists in Papunya work and listened to them discussing the importance of the stories, and in 1996 Ningura commenced painting in her own right for the Papunya Tula Artists Cooperative.

A traditional woman, as she painted Ningura would often sing the songs for the story appearing on the canvas. Her paintings focus on, and depict the mythical travels of her Ancestors and the sacred sites in her country. Ningura along with the other Pintupi women, once painting their own stories and culture as widows of major artists, took their art to a new dimension with their distinctive styles and technique. They in fact took the classic Pintupi style of their husband’s legacy and developed delicately executed yet significantly strong contemporary designs.

In 2000, Ningura participated in a collaborative painting, “Kintore Women’s Painting”, by senior Pintupi women, which was included in the ‘Papunya Tula: Genesis and Genius’ exhibition at the Art Gallery of NSW, Sydney.

In 2003 she was chosen along with three other Pintupi Artists painting for the Papunya Tula Cooperative (Naata Nungurrayi, Graham Tjupurrula and Dini Campbell Tjampitjinpa) to have one of her paintings represented on an Australia Post international stamp.

Ningura had her first Solo Exhibition with William Mora Galleries in 2000 after participating in an initial Papunya Tula Artists Exhibition in 1996. Her works featured in several Group Exhibitions in Sydney, Melbourne and Darwin in 1999.

In 2006 Ningura was one of only eight aboriginal artists chosen to be represented in the collection of the Europe’s most important public museum, the Musee du Quai Branly in Paris.

In 2007 and 2008 Ningura was included in the list of 50 Most Collectable Artists by the Australian Art Collector Magazine.

Ningura Napurrula was one of the most respected and influential female artists from the Western Desert region. Her memory will live on in the magnificent artworks that she created that now hang around the world. 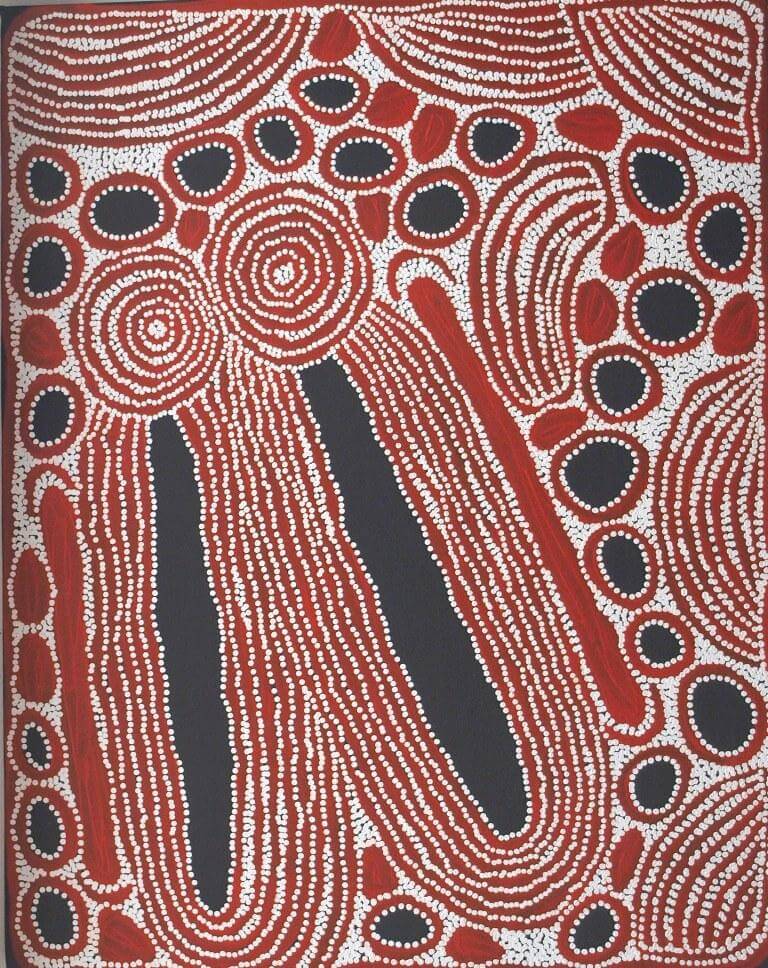