Rusty Peters was born on Springvale Station, East Kimberley, Western Australia in 1935.  He grew up and worked as a stockman on Springvale, which is the content of many of his works.  The family relocated to Mabel Downs Station after his father was lost in a riding accident, and Rusty continued as a stockman and valued horse-breaker.  The family then moved to the fledgling Turkey Creek Community (now Warmun) where Rusty took his place with the Kitja Elders in passing on the culture to the young boys.  He worked with Hector Jandany and George Mung Mung who along with Jack Britten and Paddy Jampinji were to become the First Generation Ochre artists, all of whom are now deceased.

In 1989 he moved to Kununurra and worked at Waringarri Aboriginal Art Centre, the first in the East Kimberley area.  He assisted artists, in particular Rover Thomas (dcsd.) and learned the many facets of the art trade whilst painting infrequently.  He participated in printmaking workshops with Waringarri. He commenced painting seriously in 1997 with Freddie Timms and Paddy Bedford.  His intimate knowledge of the country from his station background and the associated Dreaming Stories now form the basis of his very distinctive works, depicting a sparse mapping style and grass routes ‘bones of the earth’ iconography.

Rusty has the most interesting face, weathered by the rugged Kimberley conditions and perhaps by life itself.  The very well known artist Nicholas Harding who has been an Archibald finalist every year since 1994 and won the Archibald Prize in 2001 with a painting of actor John Bell, in 2002 and 2004 submitted portraits of Rusty for this prestigious Award.

His dry sense of humour and casual style of speaking is legendary – in 2005 whilst attending an Exhibition at Parliament House in Canberra, in reply to political remarks such as “(Aboriginal Art) is our most profound, significant and important cultural export. I don't think there's any question about that" Rusty merely commented "I'm just proud of what we've done”.

Rusty Peters is an established high profile International Artist, with works in major Collections and Museums around the world. 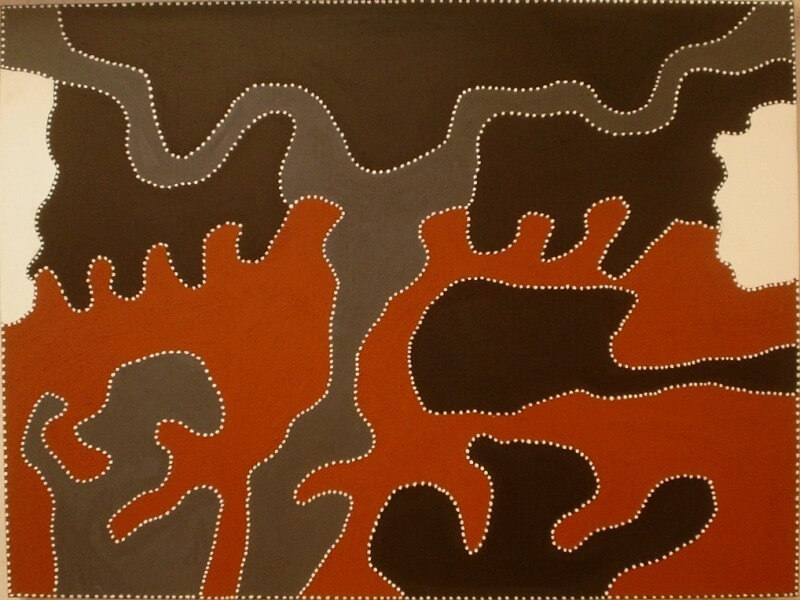