Aboriginal body painting or art and personal ornamentation is an ancient tradition which carries deep spiritual significance for the Australian Indigenous People. Their cultural rituals including body painting differ between Aboriginal Tribes and topographic location. It is related to spiritual matters and is very creative in character.

The specific designs and motifs used by the Aboriginals reveal their relationships to their family group, social position, tribe, precise ancestors, totemic fauna and tracts of land.

There are very strict guidelines to how the body painting and adornment is carried out and an Aboriginal person is not allowed to just use any motives or adornment in their transformation. They must follow traditional, respected patterns. The person adorned with the body paint often takes on the spiritual part of their ancestor dancing, immersed in their character. 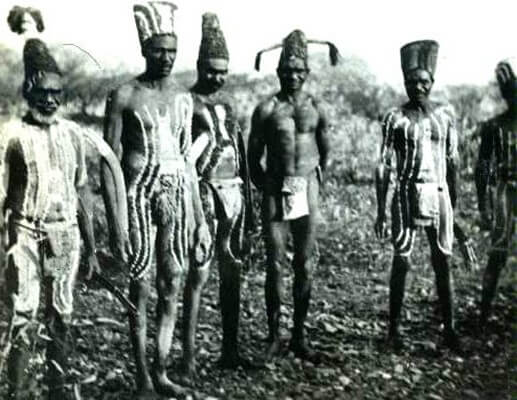 In Arnhem Land the people decorate the bodies of young boys for initiation ceremonies. They are painted in tribe/clan totems to the upper body and thighs.

In Eastern Arnhem Land (Yolngu) the men are painted according to their Moiety (Clan/blood line) either Dhuwa or Yirritia. Women of the desert painted their upper chest, shoulders and breasts for communal women’s ceremonies. Moiety is a form of social organisation in which most people and, indeed, most natural phenomena are divided into two classes or categories for intermarrying so as to ensure that a person does not marry within his/her own family.

In art, moiety can play an important role in determining the subjects (Dreamings) which an artist may paint.

Colour varies between different regions of Australia and tribes. Clay is often used as a colour source, as is as ochre, when at hand. Many tribes use precise colour pairing such as pink and red or yellow and white. Feathers, leaves and plant materials are also used to add colour to arm and leg ornaments.

Animal fat is often mixed with paint so that they stay longer on the body because most ceremonies last for days. Such ceremonies involve storytelling, singing and dancing. 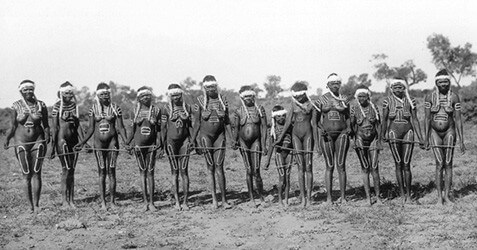 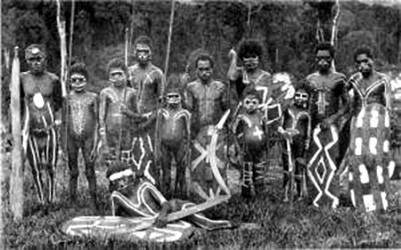 The Tiwi on Bathurst and Melville Islands also have a thriving tradition of body art. They decorate face and body in particularly strong designs for both Pukumani (funeral) and Kulama (yam) ceremonies.

In northwest Queensland, men rub their foreheads with charcoal and paint a white band from either eyebrow down the front of the ear and along the shoulders and arms. White and red bands are painted across the chest and the rest of the body is covered in red.

Aboriginals use different items and ways to decorate the body include scars, feathers, shells, teeth, ornaments, face paint, and body paint. Symbols are greatly used and can represent many things about the person who uses it. It is often used to tell a spiritual story.

Scarring used to be common practice done by males to denote their social status. Sharp shells or rocks were used to cut the skin and then rubbed with ash or other irritating material to inflict a permanent scar and skin discoloration.

Only specific relatives are given the right to paint another woman’s body. It is not appropriate for women to paint themselves for ceremony. The long communal painting and decorating process is part of the entire ritual right through to the dance and main singing. At the end of each performance the body painting is smeared and disguised or obliterated, just as the stamping feet of performers ultimately destroys the design on the ground.

Every type of painting and decoration corresponds to Aboriginal laws, regulations or convention, as well as religious functions. They also represent a particular region or tribe. Symbols are used to communicate the social status of a person, his or her age, totemic duties, and the role he or she plays within the family group. Hunting ceremonies, circumcision ceremonies for boys, as well as ceremonies that involve women undertakings are classic examples that involve body painting. For instance, boys from Arnhem Land display specific painting on their chests and the men who perform their rite-of-passage ceremony are also painted. When painting young girls, specific symbols are displayed on their body to encourage the growth of breasts.

Despite social and environmental issues concerning the survival of Aboriginal culture, all indications point to the unceasing strong existence and perpetuation of their unique way of life. Aboriginal body art has revealed that their culture has flourished for thousands of years and will continue in the long, indefinite future.

Image credits:
Thanks to Sir Walter Baldwin Spencer
Thanks to Aboriginal Culture
Thanks to the NT Library